For Murals from other years please visit my Murals Homepage. 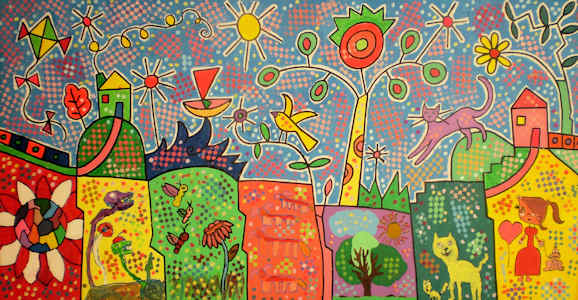 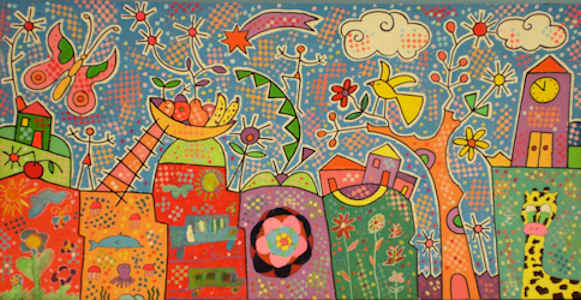 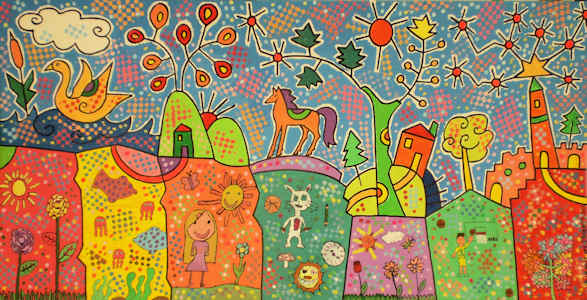 "A Place To Learn and Grow"

On May 23, 24 and 25, 2012 I worked on a mural project at St-Foy Elementary School in St-Foy, Quebec.
I worked with the collaboration of cycle 2 teacher Karine Turcotte and her students.
The mural was made on three sheets of plywood and installed in the Cafeteria.
The theme of the project was based on the School’s logo “A Place to Learn and Grow”.
I started by drawing images that evoked a sense of space such as mountains, buildings, lakes, and placed children and animals in these spaces. Because the mural was to be placed in the Cafeteria, I drew some children climbing a ladder to a bowl of fruits in the middle of the composition. I thought this would this send the students a healthy message concerning eating habits.
The students joined in this Celebration and created a series of drawings varying from animals and people to sports and schools activities.
I chose the song “You Learn” from Alanis Morissette because of it’s obvious connection to the theme.
I’m very pleased with the result and I hope you’ll enjoy it as well.
Bravo to all the participants!
Marcio Melo 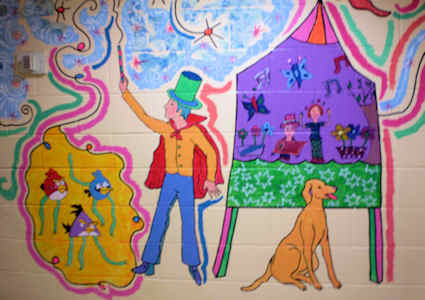 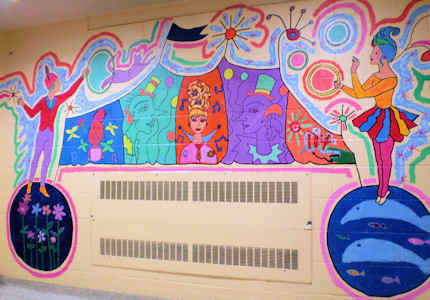 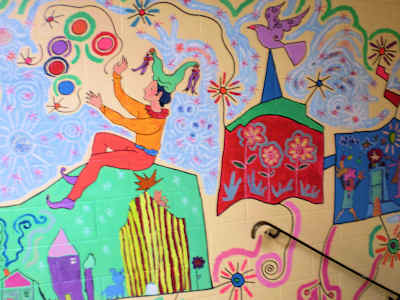 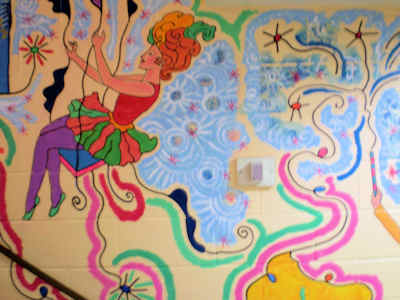 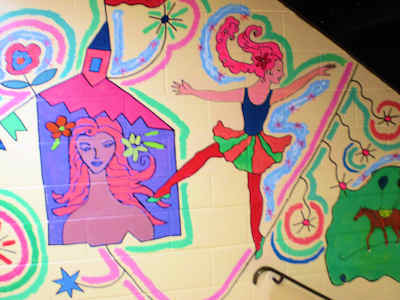 I worked with students of Les écoles Albatros et des Roseraies in May, 2012 on a mural project with the theme "The Circus".
The images chosen to express this idea refer to the imaginary archetypes found in the circus such as an Acrobat, the Magician and Clown, among others.
I chose the song "Semper Fidelis" because of its obvious power to make us think "Circus". Nothing better than the classic atmosphere, perfect joy and fantasy that connects to the theme.
Congratulations to the students who participated!
Thank you,
Marcio Melo 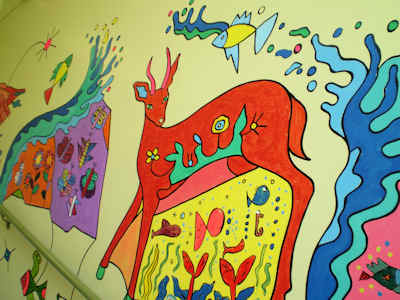 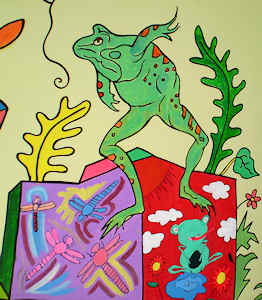 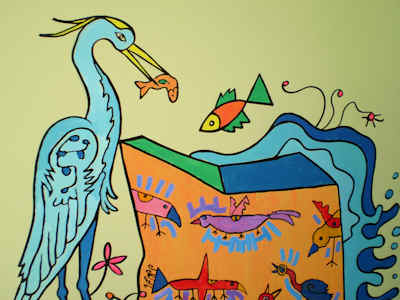 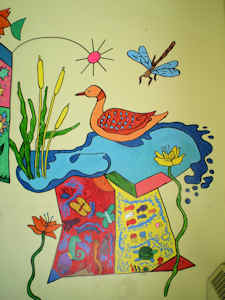 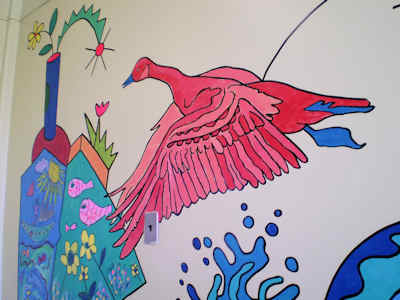 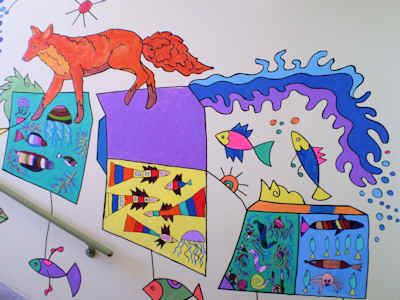 On May 9, 10 and 11, 2012, I worked on a mural project at Parkview Elementary School in Granby, Quebec.
The project theme was Aquatic life - therefore the presence of so many wonderful creatures both in my drawing and the students' works as well.
This was a wonderful group of young artists to work with. They were very enthusiastic and motivated to do their best.
I chose the song "Wave", a classic from the Brazilian Bossa Nova repertoire for its’ beautiful lyrics and obvious connection to water.I hope you’ll enjoy it!
Bravo to all the participants.
Marcio Melo 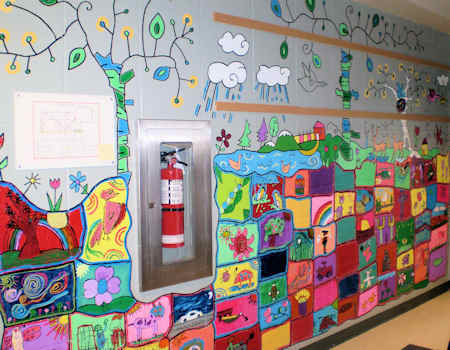 From April the 23rd to the 27th, 2012 I worked on a mural project at Birchwood Elementary School in St-Lazare, Quebec.
It was a five day project and we had close to three hundred participants. Working in collaboration with art teacher Erin Wainwright made all of this possible. As well, we had the help of very motivated teachers and parents. Even the Principal, Mme. C ,took part in it, painting the leaves of the birch tree in one of the panels.
The theme of the project was “The Four Seasons” and the students really impressed me with their sketches, depicting events and activities that took place in each of them.
We created a series of squares for the students to place their drawings and above them all, one can see scenes containing elements of the four seasons.
On each of these panels stands the birch tree with different colour leaves for each season.
Given the difficulty to obtain permission from all the participants to be filmed, I approached the teachers and parents and suggested that I could make a video with them painting and dancing instead. They agreed to the idea and the result is what you can see on this video.
I was very touched by their enthusiasm. In spite of their tight schedule they were able to spare me some time at the end of their busy day to paint, dance and celebrate the creation of the mural.
I realized the four seasons drawings were a perfect metaphor to evoke “Just a day out of life"” as stated in the lyrics of Holiday, the song by Madonna, chosen to highlight this beautiful art piece.
I’m very proud of this mural and very thankful to Birchwood Elementary for inviting me to do this project.
Bravo to all these wonderful artists!!!!
Marcio Melo

On April 18, 19, and 20, 2012 I worked on a mural project at Carlyle Elementary School.
The mural was placed right at the entrance of the school in a space composed by three walls.
The School wanted to highlight some of its ideals and therefore you’ll see some of them written on top of the doors.
We discussed in class the importance of striving to be knowledgeable, open–minded, balanced, caring and reflective. The drawings made by the children reflect on these concerns.
I chose the song “How Beautiful a Being Could Be” by Brazilian singer/composer Caetano Veloso. It’s meant to be a compliment to all the beautiful participants of this project and their enthusiasm to learn and do their best in School and in Life.
Bravo!!
Marcio Melo 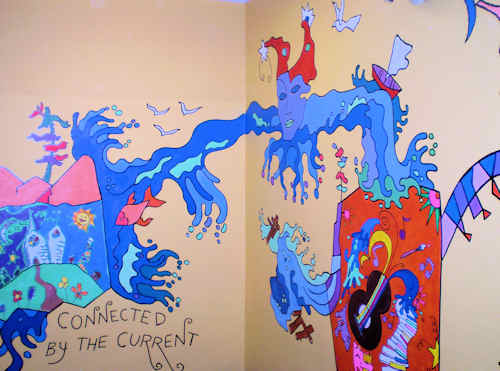 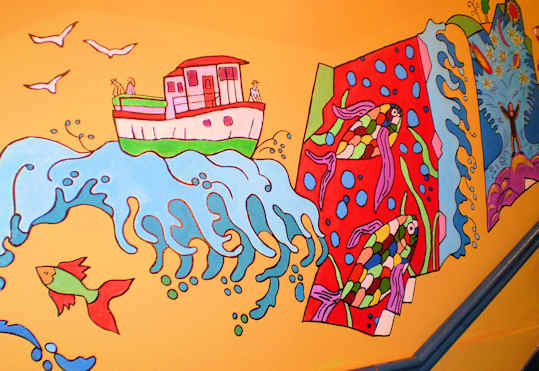 "Connnected By the Current"

On April 3, 4 and 5, 2012, I worked on a mural project at Shawinigan High School with the collaboration of art teacher Winnie Lilley. The mural was executed on a yellow staircase and the theme ranged from images evoking sports activities to the Arts.
Talking over the phone with Winnie, we discussed the possibility of creating a background that would evoke some of the elements of the local environment such as rivers and rocks.
I drew a series of waves on the wall connecting the spaces in which the students placed their drawings.
They all worked very hard on their personal images and the result is excellent
I chose the song the Waters of March, a major classic of the Brazilian Bossa Nova repertoire for the obvious reference to water and rivers.
Bravo to all the participants for the great work they did! Enjoy it!
Marcio Melo 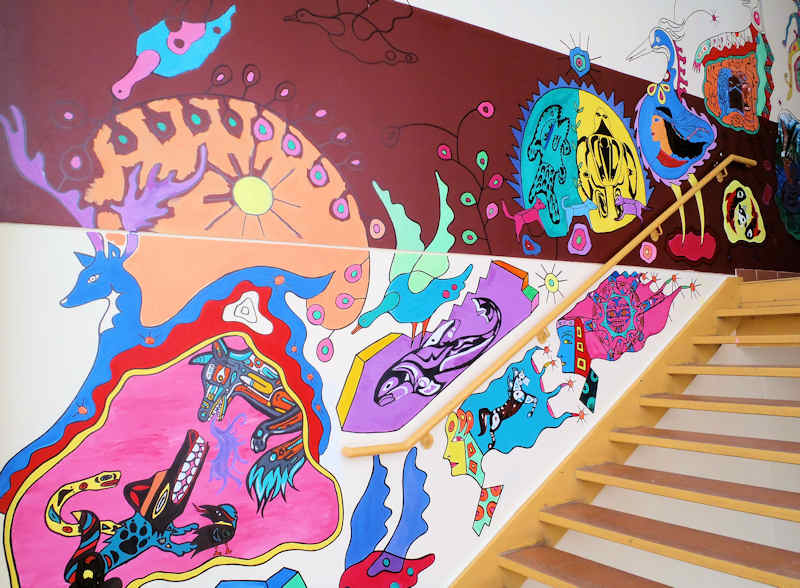 "Flying Through the Veil"

On February 27, 28 and 29, 2012 I worked on a mural project at Symmes Junior High School with the collaboration of art teacher and friend Sylvia Bretzloff.
We have done several projects together in last few years and the experience is always very exciting.
On one of the occasions working there I came across one of her many books on native art and we thought it would be a great idea to do a mural honouring Canada first nations.
As always, the students were very well prepared for this project, having selected and drawn many interesting images inspired on first nation's art. We later encouraged them to step out of the box by infusing these images with their own personal touches and interpretations.
The setting for this project (a staircase) was very special given the fact that it already contained an installation of flying geese hanging from the ceiling, and a saying written on the wall about people being like stained glass.
I tried to harmonize these influences by drawing many geese flying on the wall and having many references to people such as faces and masks in the background.
The project took on a life of it's own once the students started on it.
The title of the video comes from a comment made by Sylvia's sister Carol, who thought we had steeped into a metaphysical dimension and had truly connected to the native spirit of Art, and therefore it was called "Flying Through the Veil".
Bravo to all participants!!
Enjoy the video!
Marcio Melo 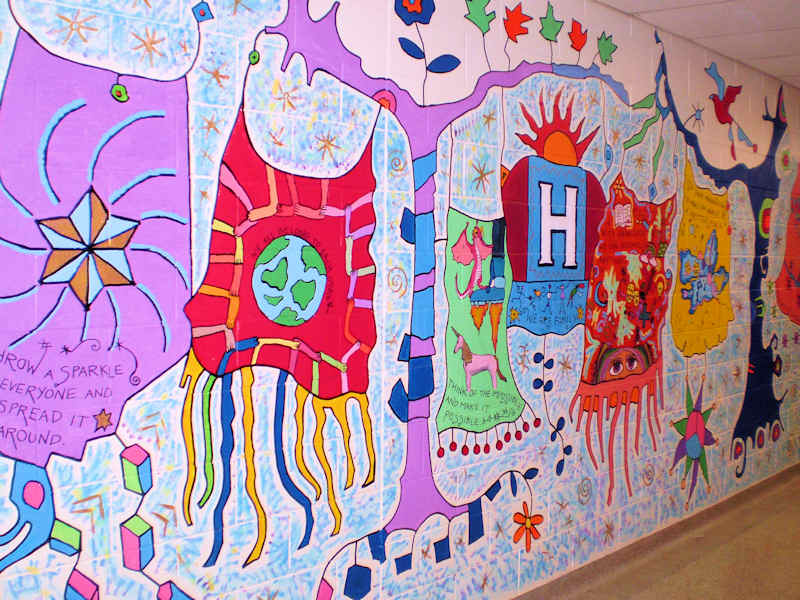 On February 20, 21 and 22, 2012 I worked on a mural project at Hadley Junior High School in Gatineau.
The theme for the mural was "Spirit of Hadley".
Talking to art teacher Kay Kerman, with whom I worked on this project, we agreed to create a background that would resemble the praying flags of Tibet.
These spaces once painted became the background for the students to place their images and words, which were statements about self esteem, hope, inner beauty, strength and positive messages that could be directed to all the school's students.
It's the first time I've worked on a project where students included both writing and drawing, and I'm happy to have used this new concept. It's great that they have so many inspiring things to say, and how the drawing influences the writing, and vice-versa.
Given the individual nature of the messages displayed. I thought the song "World In Our Hands" suited the concept of the project very well.
Bravo to all participants!!!
Enjoy it!!
Marcio Melo 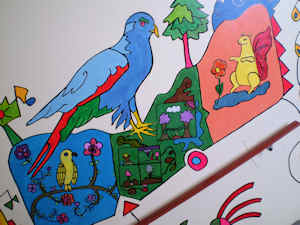 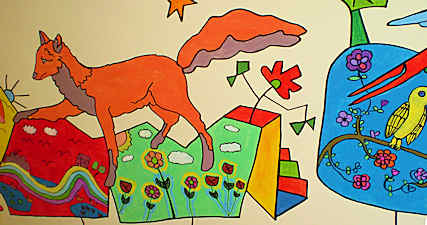 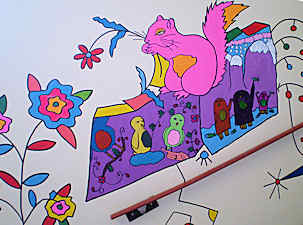 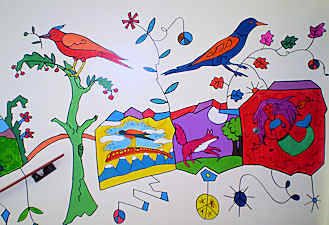 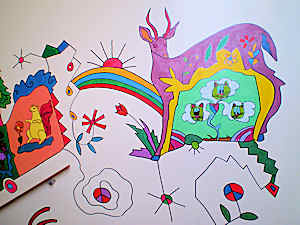 On February 14, 15, and 16, 2012 I worked on a mural project at Souvenir Elementary School in Laval.
It was my second time at this School and I was delighted to work on those beautiful and smooth staircase walls again.
This time we decided to honour our Canadian wild life and there are many references to deer, falcons, foxes, squirrels and birds in the background and in the paintings made by the students.
I'm very happy with the result and very pleased to have worked with such a great group of kids.
Bravo to all the participants and many thanks to Mrs. Sacco and Mrs. Cifarelli for having invited me again!!!
Marcio Melo 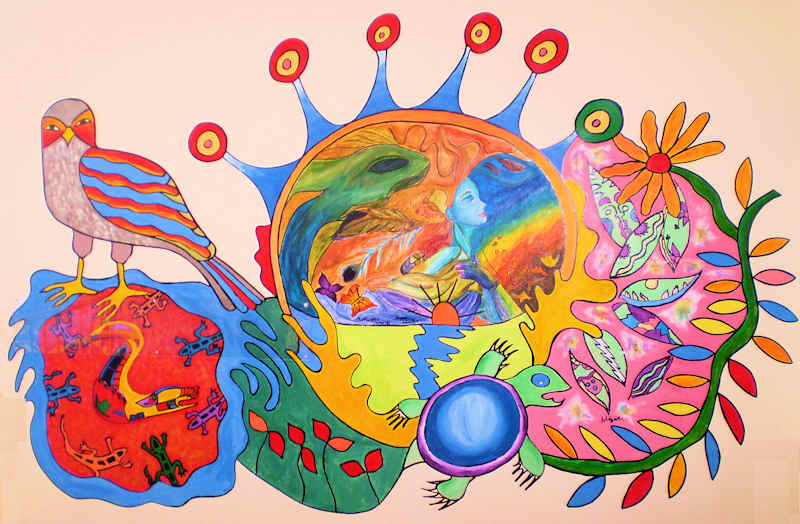 On February 1st, 2nd and 3rd, 2012 I worked on a mural at D'Arcy McGee High School in Gatineau for the first time.
I was pleased to be able to work with Dance/Art teacher Jessica Levman on this project.
The theme was based on first nations art with an emphasis on their representation of animals, therefore the title of the video "Our Animal Spirits".
The students had worked on a series of drawings prior to my arrival and had been successful in selecting a variety of options to be depicted on the wall. They worked hard and were able to express themselves in a personal way, which I think is the main goal for an artist whenever he or she is working from a very well known source of inspiration such as native art.
The result is amazing as you can see in the video.
Bravo to all the participants!!!
Marcio Melo