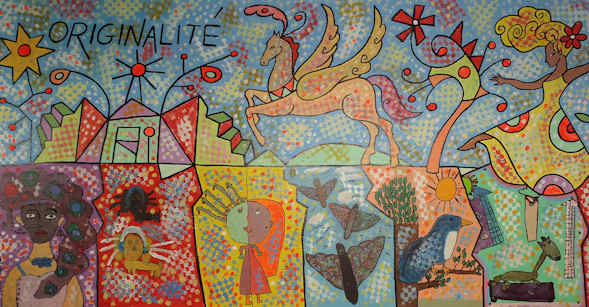 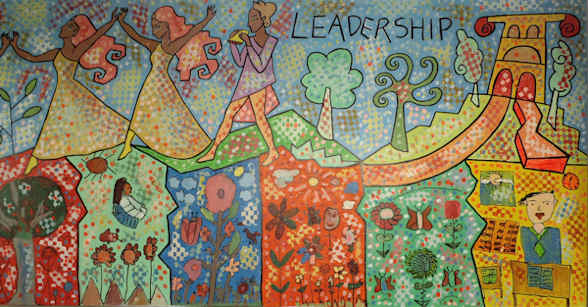 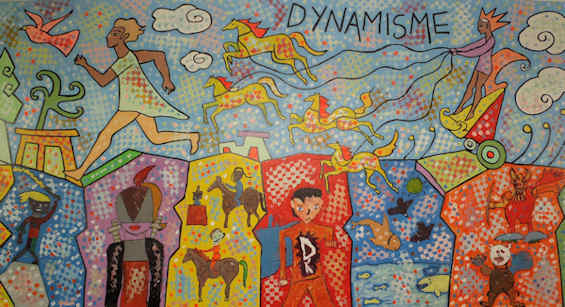 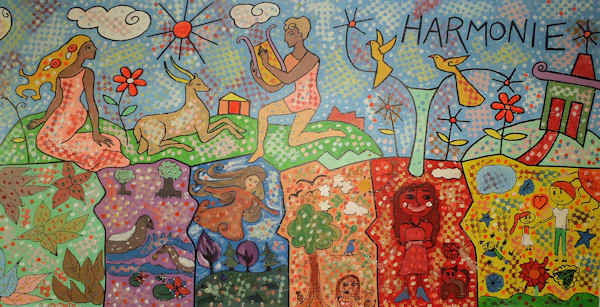 These four ideals are originality, dynamism, leadership and harmony.

Participants sought myths and legends of the world to create their images.

I was inspired by Greek mythology to illustrate the four ideals represented in the upper part of each panel.

Bravo to all participating artists for the beautiful work!

The theme was “Birds and Flowers”.

The result is very pleasing giving the decorative quality of the images. 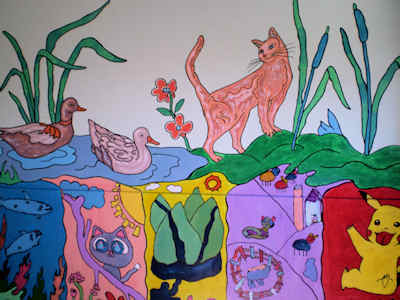 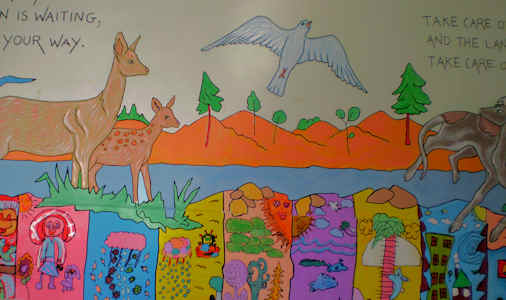 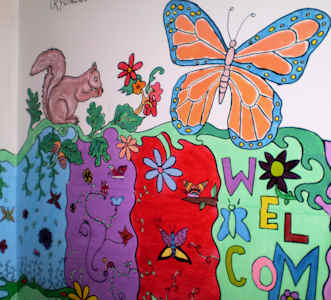 It’s my third time in this school and always a pleasure to work in collaboration with teacher Sue Hamilton.

There was no particular theme to this mural except that nature prevails in most of the drawings. I chose the title for the video from one of the sayings painted in the mural “Your Mountain Is Waiting”. 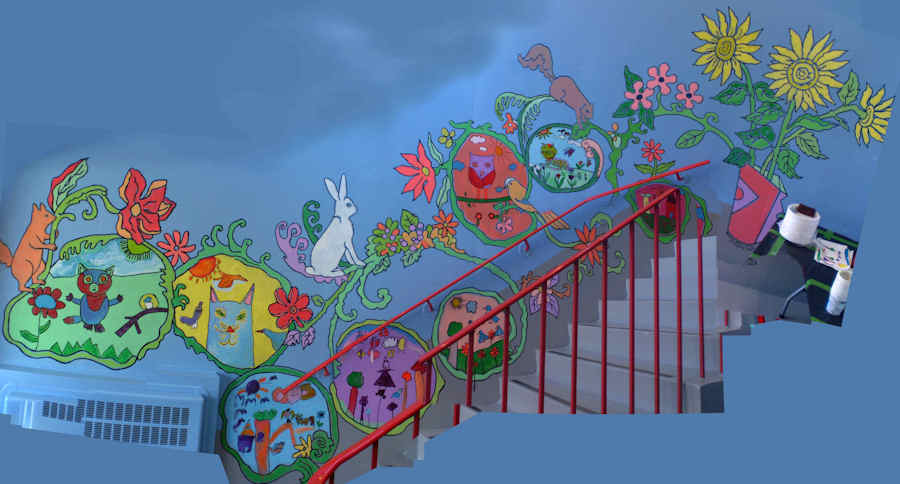 This project took place on a freshly blue painted staircase. I worked in collaboration with cycle one teacher Karine Turcotte.

This blue background inspired me to draw some sunflowers and vines on a art nouveau manner. In them, I placed a series of animals and insects of a small scale such as bees, butterflies, squirrels and rabbits.

This background seemed to exude a definite spring quality and that’s why I named the mural "Spring Magic".

The students added their touch creating a series of people and animals. They turned out wonderful !!!

It was a pleasure to be back at this school and I’m proud of what we accomplished.

I worked with the music teacher Mrs. Helene Marois for a second time.

The project title was "Lire, j’aime ca en bibitte!!!" and the inspiration was obviously insects.

In the series of images that I drew there are butterflies, ladybugs, millipedes and other sympathetic characters in the book of bugs.

The students produced a beautiful series of images with reading as a theme. 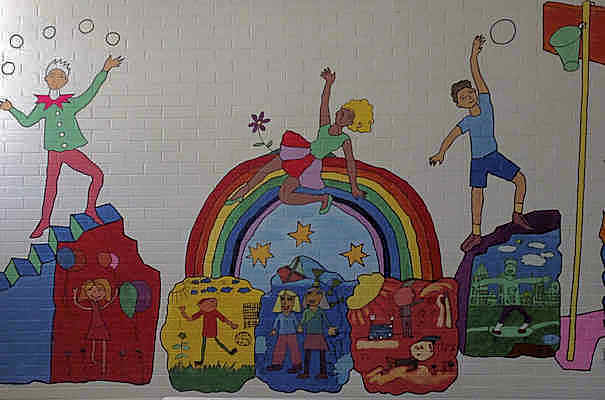 On March 26, 27, 28 I worked on a mural project at Carlyle Elementary School in the Town of Mount Royal, Quebec.
The theme for this project was "Carlyle In Action".
I had the pleasure of working with Miss Emma for a second time on a mural project and I'm very happy with the result.
Bravo to all the participants!!!
Marcio Melo 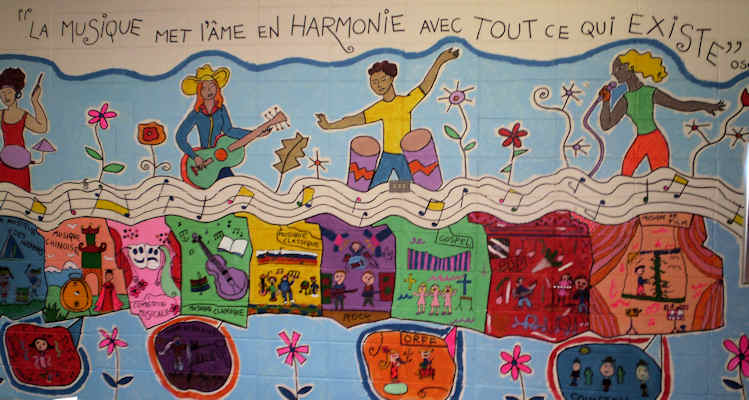 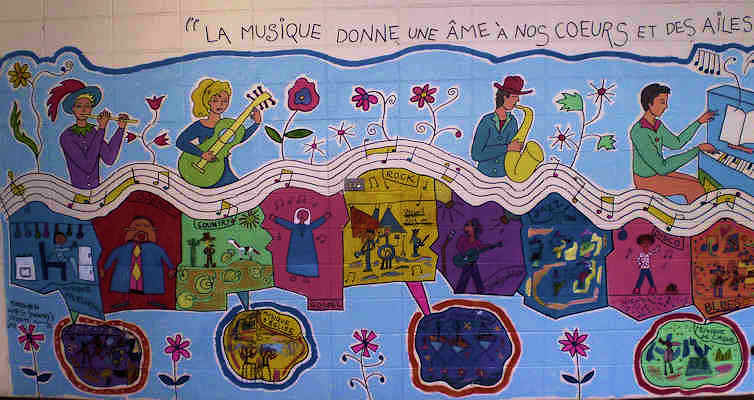 On March 20 and 21, 2013, I worked on a mural project at St-Dorothy Elementary School in Montreal.
I worked in collaboration with the music teacher Esther Gonzalez and the theme of the mural was "Music through the times".
The students worked on a series of sketches depicting different music styles. I added the name of these styles to the pictures to better identify them.
The result is quite interesting!
Bravo to all the participants !!
Marcio Melo 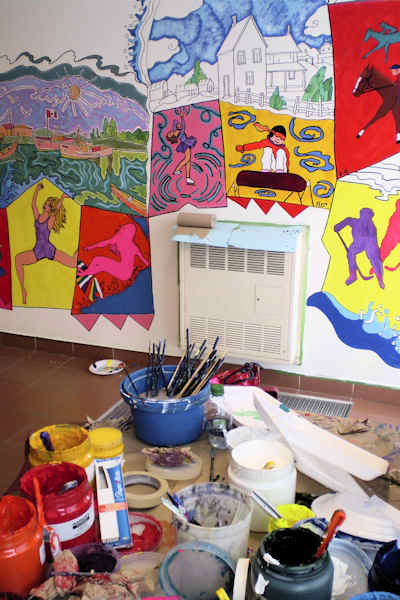 On February 25, 26, 27, 2013, I worked on a mural project at Symmes Junior High School, Gatineau (Aylmer), Quebec with the collaboration of art teacher Sylvia Bretzloff.
The theme for the mural was “Extreme Sports”.
I designed a background of Canadian landscape featuring images from the East Cost and Newfoundland.
The students excelled in their depiction of extreme sports and the result is a wonderful collage of vibrant images.
Bravo to all the participants !!!
Marcio Melo

On February 19, 20, 21, 2013, I worked on a mural project at Hadley Junior High School in Gatineau (Hull), Quebec, with the collaboration of the art teacher Kay Kerman.
The theme of this mural was “Stay Connected”.
I designed a series of human figures holding hands all along the staircase where the project took place.
The students came up with a series of very interesting images symbolising different ways to stay connected to life and to others in general.
Congratulations to all the participants.
Enjoy the video !!
Marcio Melo


On February 5, 6 and 7, 2013, I worked on a mural at Chimo Elementary School in Smiths Falls, Ontario.
This is my third time working in Ontario and I am glad for this opportunity to expand beyond Quebec with my mural projects.
This time I had the pleasure of working with the collaboration of teacher Michelle Simons, who first saw one of my murals in Montreal and invited me to do one at Chimo Elementary.
The theme for the mural, “Chimo Virtues” , was discussed in detail on the first day of exercises in class, creating images that turned out to be very well executed in the final mural. In my opinion these students really exceled in their interpretations of values such as honesty, resilience, caring and fairness among
One of the students had “Walk in other’s shoes” written in one of his sketches. After discussing with Mrs. Simons how the project should be titled we agreed that this simple and commanding phrase would be perfect for being able to encompass virtues such as empathy, caring and understanding.
I chose the song “Marching On” for it’s obvious connection to the title of the mural.
This was a really enjoyable project giving the dedication of the students and staff in general. Thanks to Kathy and Michelle for helping bringing it to a higher level of completion.
Bravo to all the students for doing such a beautiful job !!!
Marcio Melo

Read the story in the Record News

On January 29, 30 and February 1, 2013, I worked on a mural project at Souvenir Elementary School in Laval, Quebec.
It’s my third time at this school. This time we worked on a staircase with great windows and wonderful light.
The theme of the project was the environment and the importance of protecting it. The students created a series of beautiful images relating to nature, ranging from animals to plants to the Earth.
The result is really great!
Bravo to all the participants!
It’s always a pleasure to be back,
Marcio Melo

I had the chance to work at Notre Dame School in Gatineau (Hull) on a mural project during the days of 23, 24 and 25 January 2013.
The theme was "Reading." We did collaborative exercises in class and students produced a series of very interesting images. They produced images that suggested reading, and also music, perhaps due to the influence of the music teacher Helene Marois who helped us a lot with this project.
The result is fantastic!
Congratulations to the students participating in this wonderful experience!
Marcio Melo